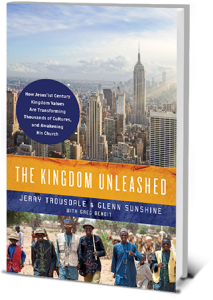 If you’re like we are, you want to read everything Jerry Trousdale collects and writes about making disciples. Catch his new 2018 book, “The Kingdom Unleashed: How Jesus’ 1st-Century Kingdom Values Are Transforming Thousands of Cultures and Awakening His Church” by ordering either the print or kindle version here:

There was some confusion over this title. We asked Jerry to explain and he did. We’ll include his comments in full below. Just remember that his first book (2012) was entitled, “Miraculous Movements: How Hundreds of Thousands of Muslims Are Falling in Love with Jesus.” This brand new 2018 book is “The Kingdom Unleashed.” We’ve now ready it and it’s GREAT — filled with case studies AND instruction. (He actually included Brigada’s review comments to the book in the frontal pieces! Go Jerry! : ) )

When we asked Jerry to explain why there had been cover art floating around for some time for this 2018 book (since 2015, in fact), he told us in a personal note, “The book Kingdom Unleashed was originally going to be a Thomas Nelson book but my co-author Dr. Glenn Sunshine and I knew that we would need a year or more to research and write it. After we signed the contract, there was a request to do the book in a few months. We tried very hard to do that but we were very discouraged that there was not going to be time to give it the full treatment that it needed. Within a couple of months however, Thomas Nelson decided to liquidate that division with 30 books in process. But they wanted to keep The Kingdom Unleashed because Miraculous Movement was a best seller for them. But when they could not find an editor with time to do the book, we got the rights reverted back to Glenn and me. That was in 2015 and the old cover has been on the internet until recently when Nelson/Harper Collins was kind to scrub the old images so the new book could be released. This was actually a gift from God, because it took us more than 3 years to research and write the book that is just now being released. Jerry Trousdale”

Thanks for the response, Jerry!