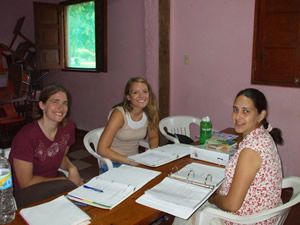 Roca Blanca Spanish Language School teaches Spanish within the context of the largest concentration of unreached people groups in the Western Hemisphere! In Mexico’s southern state of Oaxaca, there are 16 major language groups with 155 dialects, many within a half day journey from its location on the Pacific coast. The intensive Spanish curriculum is written by missionaries for missionaries, and includes you in occasional evangelistic outreaches into indigenous villages through a mobile medical clinic and children’s work. The course is designed to affirm or supplement missionary training you’ve had. It’s taught by a combination of veteran missionaries whose experience covers several Spanish speaking countries, and by English speaking Mexican nationals. Not for the faint-hearted, but for those who are serious about learning and ministering in Spanish. Check it out at