14) The Last Bit: Enjoying Millennials and the Mission of God 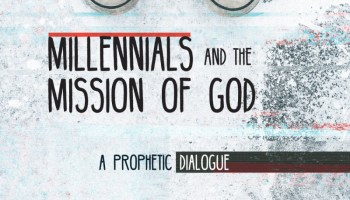 We’ve been enjoying the exchange regarding the book, “Millennials and the Mission of God, A Prophetic Dialogue.” We hope you have too. And by the way, we did learn from the publisher that a Kindle is indeed in the works. And then one of the commenters told us suddenly that it’s now live! (Thanks Joshua!)

And speaking of Joshua, his comments about the book were insightful. And we loved it that he is indeed a millennial, so we were hearing from the person about whom the book is written, after all! : ) He wrote, “Wow. Very interesting. There’s so much that could be commented on and discussed just from that introductory chapter! … First of all, I think the approach is valuable and refreshing. My first reaction to the topic was a slight eye roll. “The problem with millennials” is such a hot topic and everyone wants to talk about it without actually talking to millennials (or taking them seriously in any way). However, I took a look and behold this appears to be a real attempt to have a real dialogue with a real life millennial. That’s a good start.

The dismissive attitude toward millennials is a significant problem and I think this is something that mission organizations, including our own, need to really consider. [Doug: Ouch! : ) Oops — he works for the org I lead. Gulp. : ) ] When the whole “dialogue” around millennials is comprised of older generations (as well as millennials more influenced by or trying to fit in with/please boomers) making jokes or complaining about millennials, you aren’t providing a very attractive environment for them. I think this comes out of a mindset that sees the generational perspective of the boomers and/or the greatest generation, etc., as well as frameworks like modernity, as being the standard or norm, that these are the right ways of thinking. I think it’s actually more that these perspectives are not always understood within their generational roots, but rather just considered timeless. All that to say that the millennial point of view (if one could paint with such a broad brush) is considered a deviation from the right way, or what has always been (to be fair, I’m sure in a few decades or less we’ll be looking at it the same way) without the proper recognition by older generations of how much their point of view has been shaped by their culture and time (and not necessarily just truth and the Bible) as well.

So, a fair dialogue that isn’t just claiming to listen to millennials, while just getting some token comments and spending the whole time patronizing them, is the right approach.

Another comment I wanted to make was more in regard to your post. You said “maybe we’ll have some helpful dialogue to understand not only how to relate to this young and daring generation, but how to help them change the world in which we live.” A couple of things about this. First, you’re already talking to a mixed audience (I’m a millennial, so you’ve got at least one), so you don’t need to talk in the us and them terms (“we’ll have some helpful dialogue to understand … this generation). Some of us are in our mid and upper 30s now. In many churches and organizations there are millennials in positions of leadership. So, it’s not just a “lets try to understand how the kids are thinking these days” kind of thing. If a ministry doesn’t already have at least some engagement/involvement of millennials then honestly it may be too late by now (the next generation beyond millennials is already moving up into places of influence). They’re (we’re) probably already around, so be careful not to talk past them like they’re not even in the room. [Doug: VERY helpful. Thanks!] Second, they’re already changing the world… a lot. So you may want to ask how to help them engage more with the facet of the mission that you or your ministry has been called to, but there are a multitude of ways to change the world (I know, my millennial is showing) and millennials are out there coming at it from all angles.

Finally, I just have to say that the millennial spokeswoman in the book sorely misrepresents her generation in at least one point. She characterizes a millennial as having a Starbucks latte in their hand. Sorry, but a real millennial would not give in to the corporate tyranny of the megachain, and would rather have a single-origin, fair-trade, pour over in that hand. [hahahaha Love it]

[end of comments from Joshua]

What’s YOUR take on the book. We’ve now obtained a full copy and we’re covering the “rest of the story” for you. But what’s YOUR take on Bush and Wason’s write-up? Please join the lively dialogue with your comments at…

If we don’t figure this out, we might never reach maximum effectiveness or fruit in fulfilling the Great Commission.