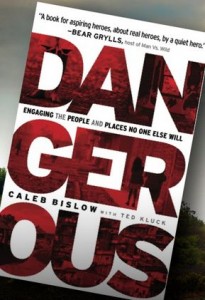 Caleb Bislow in his book, Dangerous, quotes the late Mike Yaconelli, “The most critical issue facing Christians is not abortion, pornography, the disintegration of the family, moral absolutes, MTV, drugs, racism, sexuality, or school prayer.  The critical issue is dullness.  We have lost our astonishment.  The Good News is no longer the good news, it is okay news.  Christianity is no longer life changing, it is life enhancing.  Jesus doesn’t change people into wild-eyed radicals anymore, He changes them into ‘nice people.’  If Christianity is simply about being nice, I’m not interested.”

Caleb’s view of Christianity is a refreshing view of faith.  While literally wiping out his family’s savings to head to the unreached, Caleb and his wife agree that there is more to this life than just having a good jobs and exceptional kids. “In comfortable America, it’s easy to think that God would never call people to the ridiculous or dangerous – that God’s very special plan for our lives is to have stable jobs, two-point-five healthy kids, and a taupe house in the suburbs.  But then we read the Bible.” (page 69).

While listening to that still small voice that most of us would chalk up to crazy thoughts, Caleb sees time after time how important it is to listen to that quiet voice rather than the deafening sounds around us.

Caleb inspires you to do more than just read an inspiring book – but to however, get up and join those who take the Great Commission at its word – to make disciples of all nations. Learn more at…