10) The BackPage: Facing the Demons in the Storm — 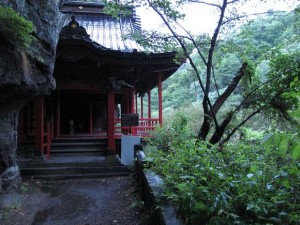 I’ve just returned from a Prayer Journey to Japan. On a dark and stormy night, we hiked up to the Shinraku-ji Buddhist Temple near the town of Komoro. The gusty wind and dark shadows only served to accentuate the forces we imagined. Maybe we weren’t imagining. Eph. 6:12 reads, “For our struggle is not against flesh and blood, but against the rulers, against the authorities, against the powers of this dark world and against the spiritual forces of evil in the heavenly realms.” I’ll never forget that prayer service as long as I live. It felt as if we were going up against dark forces — forces that had ruled Komoro for centuries.

I’m finding that this whole concept — that of facing the powers of the dark side, in the storms of life — can either build our faith (as we realize the opposing side is fairly powerless in the face of how great God is) or test it (if we’re convinced otherwise). So I’m wondering: Is there a possibility that you have a testimony of facing one of those dark forces in a prayer time, at one time or another? And if so, would you be willing to share it — in confidence, if you like? Just click “Comment” below and you’ll be guided through the sign-on process. We won’t distribute your address to ANYONE. But even better, if you work hard you should be able to write up your testimony as an anonymous contributor. Please write these as if they will be used for a national publication informing people of effective prayer-walking and “praying onsite with insight.” Just click Comment to get started. As readers share their testimonies, you’ll be able to read them along with the rest of us, instantly. (Note: Be careful about sharing URL’s in your answer (especially multiple ones). That tends to trip the alarm that maybe you’re a spammer.)